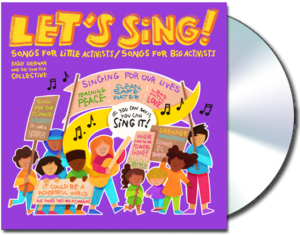 January 21, 2017: The day after the 45th president of the United States was sworn in, millions of people worldwide took to the street to protest the political positions of the new president and his party, We felt the urgency to protect women’s rights, LGBTQ+ rights, gender equality, racial equality, immigration reform, health care reform, and environmental protections put in place by the previous administration.

It was a drab day in both weather and mood. We were stunned and saddened and scared. We listened to speeches as we huddled under our umbrellas, and then we marched, but nobody was singing! Many songs came to mind and I started singing: “We Shall Overcome”, “If I Had a Hammer”, – mostly songs from the Civil Rights Movement. A few people joined in but not many knew the words. This got me thinking that it was time to start working on a new project.

There are so many different types of “protest” songs. With this collection I tried to keep the songs as positive in spirit as possible, focusing on unity, kindness and peace, but I also wanted to include songs dealing with our greatest threat – climate change.

This album is really a “double EP”, two shorter albums released together.

The first comprises songs that are wonderful for children to sing at schools, assemblies, marches, summer camps – anywhere they would like their voices to be heard and counted.

The second includes songs that we as adults should be singing. Some are songs from the peace movements of the 1950s and ‘60s, some are more recently written.

For those of you who keep track of these things, you’ll notice that some words have been updated in a few of the older songs to be gender inclusive.

I hope this album inspires you to go out and SING!

All the songs are used by permission of their publishers.