Let’s Sing Songs From Around the World! Samples 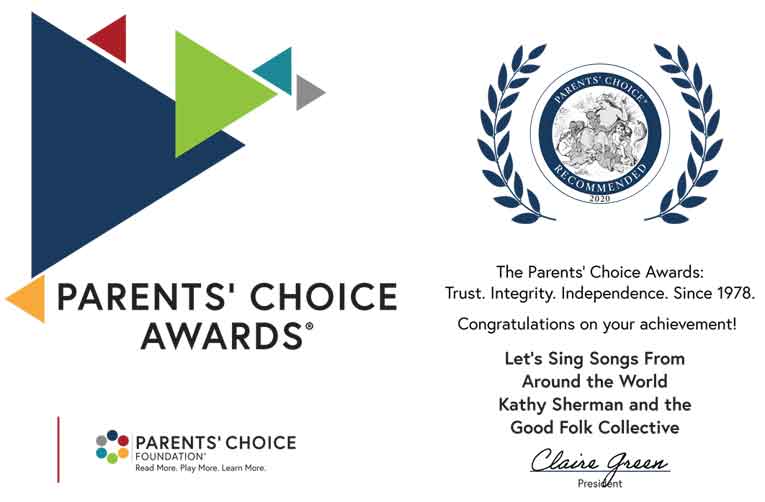 Here, singer and multi-instrumentalist Kathy Sherman and her excellent Good Folk Collective delivers 16 songs in a multitude of languages, all using native instruments, for a kind of musical world tour. The CD opens with a child-led version of American composers’ Weiss and Thiele’s classic “What A Wonderful World,” followed by the didgeridoo enhanced Australian greeting song ‘Sun Arise.” Another highlight is the traditional Native American rattle song with modern lyrics, called “For the Pepper.” …the album closes with the Brazilian popular lullaby by Badi Assad “No Colo Do Papai” (“In Daddy’s Lap”). The album is well conceived, produced and played with respect to cultural traditions, as well as a what catches children’s attention.
Lahri Bond ©2020 Parents’ Choice

Lahri Bond is a father, a writer, music historian, and an art professor in Western Massachusetts. His published books include Spinning Tales Weaving Hope (with the Stories For World Change Network) for New Society Press and People of the Earth (coauthored with Ellen Evert Hopman) for Destiny Books