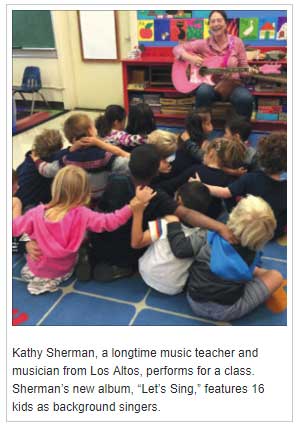 The latest album by local music teacher and multi-instrumentalist Kathy Sherman isn’t just for kids – it features some of them as background singers as well.
“I have kids singing on it that I have been teaching for many years, and my hopes are that when a child listens to this album and hears the kids, they will be able to imagine themselves on there someday,” the Los Altos resident said.

Sherman has taught music for nine years, leading 17 preschool classes for a total of approximately 300 kids. They roughly range in age from 2 to 5.
The 16 youngsters featured on the album, titled “Let’s Sing,” are 4 to 16 years old. Released in November, it comprises 18 cover songs, including “The Hokey Pokey” and “Bedtime Round.”
The sing-along album combines folk songs with rhythmic movement to teach kids songs while developing neural pathways for movement in response to music. Sherman explained that the movements include clapping, walking, dancing and singing, and that kids deprived of the opportunity to develop such skills at a young age may never be able to learn them.
“In the new album, I used the songs I teach that have been the very favorites,” said Sherman, who has lived in Los Altos for 22 years. “For each song, I incorporate movement somehow. All of these tiny little movements are things they are not used to doing, and it gives (the kids) something new to try.”

The song choice heavily emphasizes building community through music, added Sherman, who hopes that teaching kid the same songs will give them something to refer back to and sing together.
A songbook is included with the CD, encouraging children to learn a new instrument by playing along to songs they love from the record.
“I love it when parents make up their own thing, as they get to show their kids their own interpretation of the music,” Sherman said. “This gives the kids the opportunity to interact with others. I’m trying to teach songs to kids that their parents and grandparents might know from a young age, to reach deep down into kids’ heads so they have a way to communicate with their parents and grandparents, creating an intergenerational community.”

Sherman said she takes an individualized approach to each class. Classes for toddlers work on rhythmic movement, while pre-kindergarten classes work on songs they can take with them to other activities, building community.

“You want them to love what they’re doing; you never want it to feel like a chore,” she said. “Every class has different needs and different talents, so I try to look at each class and see what they need that day.”

Sherman plays more than eight instruments. She tries to vary the instruments she brings to class, in size, type and color, to build anticipation. She said when kids do not know what she will bring, they look forward to her visits more, and are often excited by seeing something they have never seen before, like a pink guitar.
“I’m always looking for an instrument that’s very difficult to learn, that will put me out of my comfort zone,” she said. “It helps me understand the challenges of learning an instrument so I can better understand my students and the challenges they’re going through.”